Liliane Weissberg Publishes the Writings of Benjamin Veitel Ephraim (1742-1811), and a Study of His Work 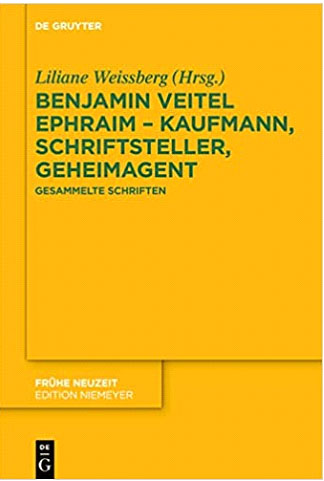 He was the son of one of Berlin's wealthiest bankers and merchants, a student of Lessing and Mendelssohn, a dealer in silver and coins, a factory owner who employed poor Jewish lace workers from the Eastern territories, and an author of economic treatises. He was also the first Jew to write a German drama (that was actually performed), the author of a scandalous autobiography that circulated in German (and as a revolutionary text in French), and Prussia's very own spy in Paris during the French Revolution. Based on extensive archival research in Berlin, Potsdam, and Paris, Liliane Weissberg’s critical edition collects Benjamin Veitel Ephraim's German and French writings for the first time, publishes many of his texts for the first time, and adds an illustrated book-length study that describes his adventurous life, his work, his times. In close to 500 pages, this book rewrites pre-emancipation German-Jewish history--and will be available soon.