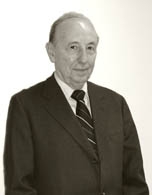 Horst Daemmrich is Emeritus Professor of Germanic Languages and Literatures and the Graduate Group in Comparative Literature.

Author of books on E.T.A Hoffman, Wilhelm Raabe, Kal Krolow, Literary Theory, as well as Themes and Motifs in Literature. His scholarly articles cover a wide range of literature and criticism from Lessing and the Age of Goethe to the 20th Century. An account of his activities can be found in Frank Trommler (Ed.): Thematics Reconsidered. Essays in Honor of Horst S. Daemmrich. (Amsterdam: Radopi, 1995). Horst S. Daemmrich is General Editor of "Studies on Themes and Motifs in Literature," a series that includes books on American, English, German, Russian, South American, and Spanish literature. He is a member of Phi Beta Kappa, Delta Phi Alpha, the Academy of Scholars, and the Academy of Literary Studies. He was awarded the Wayne State University Board of Governors Faculty Recognition Award in 1975, the Wayne State University Distinguished Graduate Faculty Award in 1979, and the Ira H. Abrams Memorial Award for Distinguished Teaching at the University of Pennsylvania in 1990. Current projects and most recent publications focus on establishing a paradigm for thematic studies by tracking war, prominent classical motifs, and narrative techniques in contemporary literature.