A Pedagogy of Observation argues that the fascination with learning about the past and new locations in panoramic form spread far from the traditional sites of popular entertainment and amusement. Although painted panoramas captivated audiences from Hamburg to Leipzig and Berlin to Vienna, relatively few people had direct access to this invention. Instead, most Germans in the early nineteenth century encountered panoramas for the first time through the written word. The panorama experience described inthis book centers on the emergence of a new type of visual language and self-fashioning in material culture adopted by Germans at the turn of the nineteenth century, one that took cues from the pedagogy of observing and interpreting space at panorama shows. By reading about what editors, newspaper correspondents, and writers referred to as “panoramas,” curious Germans learned about a new representational medium and a new way to organize and produce knowledge about the scenes on display, even if they had never seen these marvels in person. Like an audience member standing on a panorama platform at a show, reading about panoramas transported Germans to new worlds in the imagination, while maintaining a safe distance from the actual transformations being portrayed. A Pedagogy of Observation identifies how the German bourgeois intelligentsia created literature as panoramic stages both for self-representation and as a venue for critiquing modern life. These written panoramas, so to speak, helped German readers see before their eyes industrial transformations, urban development, scientific exploration, and new possibilities for social interactions. Through the immersive act of reading, Germans entered an experimental realm that fostered critical engagement with modern life before it was experienced firsthand. Surrounded on all sides by new perspectives into the world, these readers occupied the position of the characters that they read about in panoramic literature. From this vantage point, Germans apprehended changes to their immediate environment and prepared themselves for the ones still to come. 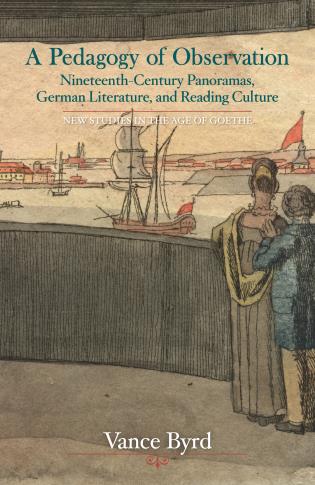