Romancing the Shadow: Poe and Race

The nine essays gathered here pursue the provocative implications of Toni Morrison's claim that no early American writer was more important than Poe in shaping a concept of "American Africanism," an image of racialized blackness destined to haunt the Euro-American imagination. As contributors to this volume reveal, Poe's response to the "shadow" of blackness--like his participation in the cultural construction of whiteness--was both problematic and revealing. Born in Boston but raised mostly in Richmond, surrounded by the practices of slaveholding culture, Poe seems to have shared notions of racial hierarchy and Anglo-Saxon supremacy pervasive on both sides of the Mason-Dixon line. That he promulgated racist stereotypes in depicting black servants--his Jupiters and Pompeys--cannot be denied; that he complicated these stereotypes with veiled, subversive implications, however, gives his fiction peculiar relevance to the task of historicizing racial attitudes in antebellum culture. Was Poe an unabashed proslavery apologist, a careerist who avoided racial politics, a "gradualist" who hoped slavery would just disappear, or an ideological chameleon? Were Poe's views on race extreme or unusual? Overtly, in tales such as "The Gold-Bug," "The Journal of Julius Rodman," and The Narrative of Arthur Gordon Pym, and covertly in such works as "The Black Cat" and "Hop-Frog," Poe alternately caricatured and demonized the racial Other, yet he often endowed such figures with shrewdness and resourcefulness, at times portraying their defiance as inevitable and even understandable. In Romancing the Shadow, leading interpreters of nineteenth-century American literature and culture debate Poe's role in inventing the African of the white imagination. Their readings represent an array of positions, and while they reflect some consensus about Poe's investment in racialized types and tropes, they also testify to the surprising ways that race embedded itself in his work--and the diverse conclusions that can be drawn therefrom. 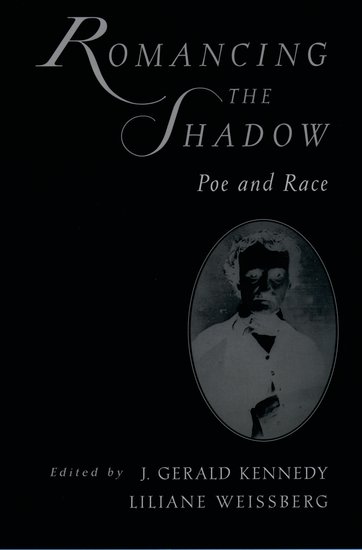