In 2016, Antarctica’s Totten Glacier, formed some 34 million years ago, detached from its bedrock, melted from the bottom by warming ocean waters. For the editors of Timescales, this event captures the disjunctive temporalities of our era’s—the Anthropocene’s—ecological crises: the rapid and accelerating degradation of our planet’s life-supporting environment established slowly over millennia. They contend that, to represent and respond to these crises (i.e., climate change, rising sea levels, ocean acidification, species extinction, and biodiversity loss) requires reframing time itself, making more visible the relationship between past, present, and future, and between a human life span and the planet’s.

Timescales’ collection of lively and thought-provoking essays puts oceanographers, geophysicists, geologists, and anthropologists into conversation with literary scholars, art historians, and archaeologists. Together forging new intellectual spaces, they explore the relationship between geological deep time and historical particularity, between ecological crises and cultural expression, between environmental policy and social constructions, between restoration ecology and future imaginaries, and between constructive pessimism and radical (and actionable) hope. Interspersed among these essays are three complementary “etudes,” in which artists describe experimental works that explore the various timescales of ecological crisis. 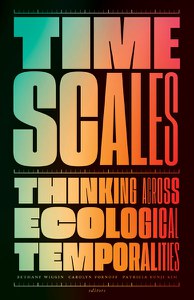