Missing the Breast: Gender, Fantasy, and the Body in the German Enlightenment

The cult of the female breast in contemporary American and European society is as pervasive as it is notorious. Our current fascination merely updates a long-standing obsession with the breast, which over the past twenty years has also become a subject of scholarly attention. Most historians and cultural theorists have focused on England and France, with virtually all research starting from the simple assumption that the breast is a signifier of the feminine and the female. With Missing the Breast, Simon Richter uses the texts of Enlightenment-era Germany to challenge that assumption, engaging instead the complexity of culturally constructed notions of the breast.

Using the tools of medicine, literary theory, psychology, psychoanalysis, and etymology, Richter probes the breast-related fantasies underlying German culture and literature in the second half of the eighteenth century. His study reveals that, whereas in England and France and in the public imagination generally, the breast has been associated with the feminine and with abundance, the inherent "logic of the breast" in German culture unexpectedly pushes the breast toward masculinity and lack. Richter's tour de force of textual and cultural analysis brings together the work of important German poets, writers, and dramatists, as well as major psychoanalysts and their critics, and writers and artists of the English-speaking world, to explore the tension between the plenitude of the breast and the implications of its absence. His engaging study draws the reader ineluctably toward a revolutionary possibility: the breast as an "unruly and uncontainable signifier," the equal and more of what Lacan called the phallus.

Missing the Breast will be an indispensable addition to the libraries of those interested in German textual studies, the history of sexuality, and theories of psychoanalysis. Its groundbreaking perspective will make a significant contribution to the fields of literary studies, gender studies, and women's studies. 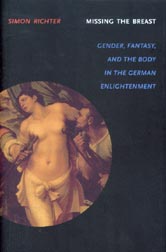